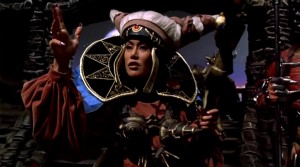 Rita Repulsa is the main nemesis of Zordon, the creator of the Power Rangers. If she had not attempted to conquer the world then the rangers would never have existed. Throughout the first season she is the key villain before Lord Zedd appears. Originally played by Machiko Soga, she was eventually replaced by Carla Perez. Her voice is supplied by Barbara Goodson.

Despite being relatively evil (if comical) for most of the series, she is eventually turned good. This occurs after Zordon shatters his own stasis tube and sends shock waves across the galaxy. In her good form she calls herself the Mystic Mother. Rather than fighting the Power Rangers she instead chooses to help them defeat their enemies. Later on in the show she fakes her own death by transforming into pure energy. In her final episode she appears to break the fourth wall by telling the audience that they can defeat evil too.

Rita is a witch capable of performing very powerful spells. Her staff is useful for turning monsters into giant versions of themselves. This would happen in many episodes of MMPR. She 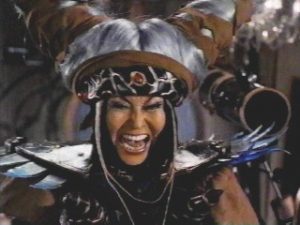 could also force humans to do her bidding with the use of magic. On occasion she turned members of the ranger team evil for short amounts of time.

Like the other main villains of the original season she can easily teleport when she needs to. Her maximum travel range appears to be from Earth to the moon. If she wanted to imprison people she could trap them in alternate dimensions. At one point she even created her own corrupted version of a power ranger. She did this by giving a coin of power to an unassuming human.

In Power Rangers Mystic Force after her turn to good she is now master of light magic. Her powers seem to have increased greatly. With her help the world can flow with strong magic. She can even connect to the Universal Morphing Grid and create her own version of the ranger team.

In the 2017 film she is portrayed by actress Elizabeth Banks. In this version of the story she was once the green ranger. However, she betrayed the old team in order to become more powerful. In the present day one of her goals is to resurrect Goldar by acquiring as much gold as possible. She is significantly more serious than in the television show.