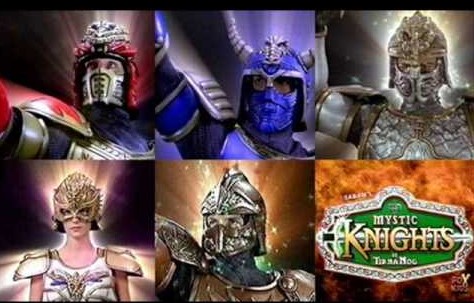 In 1998 Saban released a new series that featured many of the same elements of Power Rangers. The key difference was that it took place in a fantasy realm, based on Irish folklore. Mystic Knights of Tir Na Nog follows a group of friends, each imbued with the power of one of the mystical elements.

The show proved popular with young viewers when it came out. However, it was cancelled before a second season could be produced. The budget for this was then used to make Power Rangers Lost Galaxy. If season two did come out it would have been called Mystic Knights: Battle Thunder.

The purpose of Mystic Knights was to create a show that did not rely on adapting Japanese programmes. Power Rangers would always have to insert action footage from tokusatsu. Mystic Knights was Saban’s first entirely independent production. All special effects were done by them. This included CGI dragons, enchanted armour and magical spells.

This team was composed of leader Rohan, princess Deirdre, foreign prince Ivar, boastful Angus and the forest dwelling Garrett. Each had their own magic weapons such as: fire sword, wind enhanced crossbow, lightning trident, boulder sling and energy axe.

Aideen is a woodland fairy who serves as an ally to the Mystic Knights. She has a deep affection for Rohan which causes jealousy between her and his love interest Deirdre. In one episode she uses magic to turn herself into a human.

This ancient dragon is used by Rohan to defeat formidable enemies. He is the only knight capable of summoning the creature. Images of Pyre can be seen sculpted onto the armour of the Mystic Knights.

This wizard has a similar role to that of the legendary Merlin. He uses magic to aid the knights on their many quests.